who was orginally born Jerome Horwitz back in New York in 1903.

As the story goes, I had first visited Curly's Grave when I was on a business trip visiting IBM back in the early 90's. I had told Brad about seeing his grave as we both enjoyed watching the Stooges.

So, as the family was leaving Hollywood en route for Annaheim and the original Disneyland, I mentioned that Curly was buried right around the area we were driving through. Brad begged me to stop and I said "Sure".

However, when we drove by the cemetery it was closed as it was a Jewish holiday. Brad tried to be tough, but he was tearing up he wanted to see Curly's grave so bad. 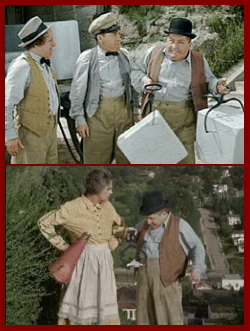 So I said to him, just he & I will come back out the next day and he instantly recovered. And that's just what we did. Curly, along with his brother Shemp, are buried in a Jewish cemetery on Whittier Blvd in what is now very dicey East Los Angeles.

On Curly's grave, you can see fans have spelled out 'Nyuk, Nyuk, Nyuk' in pennies on his grave. Another fan left 2 spoons,  all true fans would know of Curly's love for playing the spoons.

In tribute, Brad left a cup of Ice, from one of our favourite shorts where Curly plays the Iceman, delivering blocks of ice from a horse drawn carriage.

One of his customers lives up 5 flights of stairs and by the time Curly arrives at the top of the stairs with the ice block he finds his ice tongs now hold only an ice cube.

Happy to pay our respects to the great curly

and also a great moment with brad and his dad

Dad & Brad by at the masters gravesite

Visiting shemp in the mausoleum