On a beautiful Spring afternoon this May 17th, Kathy & I headed to downtown Chicago to attend the

Scott is the youngest son of my sister Jean and her husband Steve. Kathy & I are the proud Godparents of Scott, as well. Nina is his lovely fiance - where they met as undergrads at the University of Illinois some 6 years ago. 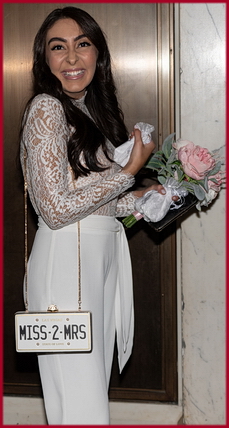 The rehearsal, wedding & reception were held at the beautiful Chicgao Cultural Center, built in 1897. This building was originally the Chicago Public library and features a rotunda that is absolutley breathtaking.

Scott is in the United States Air Force stationed in Las Vegas - where they live.

Nina works in a Dr's office while she continues her education studying to be a Physician's Assistant.

Scott & Nina had asked if I would officiate at their wedding. After I warned them that, at my age, I cry at the drop of a hat now, they still wanted my services and I was so honored to do so. We walked through the Wedding with the Wedding Planner. Everthing

proceeded swimmingly until we got to the Vows - where inexplicably I asked "Scott Richard Johnson" rather than "Scott Richard GALLO" if he will marry Nina. Ooooopps! Had to fix that one so it didn't happen at the real time on the morrow!

Following the rehearsal we went across the street to a lovely Restaurant where we were feted to a wonderful buffet. Sister Jean had a beautiful little speech, toast and prayer for the Happy Couple. Really Nice...

We got to meet Nina's father for the 1st time and what a remarkable man he is. Born of Assyrian heritage he lived in a Christian family in what is now Iraq. As Hussein came to power and the persecution of Christians became intense, he fled to Greece and eventually obtained a refugee visa to come to the United States in the early 1980's. He was able to move most of his extended family here to the States where they were safe. He speaks 4 languages, one of which is Aramic - the Language of Our Lord Jesus Christ. I spoke with him for over 20 minutes and felt that I gained a new friend and a perspective about the real dangers people deal with that here in America we have never experienced.

Picture upper left is Scott & Nina at the Rehearsal dinner. Picture upper right is beautiful Nina sporting her spanking new purse that tells you everything you need to know. Mid left is Jean giving the Toast. Directly above is Nina's family alsongside Scott's family (sorry couldn't find Jean & Steve for the picture!). Picture on the bottom is the Rotunda where the upcoming nuptials will occur.

Thanks to All for a lovely Rehearsal Dinner